August 08, 2018
Photographers have been combining art and documenting the landscape since the invention of  the first cameras. During the 1930’s Great Depression, a New Deal Agency, the Farm Security Administration was created. The FSA was created to combat rural poverty, today it is known for its highly influential photography program, now these photos are considered national treasures.

These photos documented the drought and the misuse of the land. Today, Ryan Parker is serving as a modern landscape photographer. Part prophet, part photojournalist, he creates minimalistic photographs to warn us about transforming the landscape for profit. He is not a fire and brimstone preacher or activist, instead his understated photographs with subdued graphic content remind us of the desolate landscape.  Parker's images of nature or industrial sites could be compared to the famous Danish photographer, Per Bak Jensen.  They both photograph unusual subjects, like twigs and bushes in the snow and strange concrete formations that appear to be underpasses.

Looking as his recent art statements, he is not directly asking these questions, however you sense they are in the back of his mind:
His landscape photographs are unsettling and perplexing. Not one of his photos includes the human figure, which adds to uncanny and mysterious photos. The viewer looks at the industrial shipping containers with snow piles and winter barren trees. This photograph captures the spatial forms that occur in everyday life with a reduced minimalist-style. Yet is Parker photographing sculpture, like three Donald Judd’s metal boxes, or is this an industrial waste site with abandoned containers? 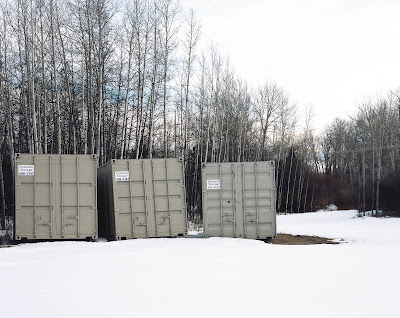 Clearly, Lewis Baltz, a minimalist photographer and a prominent representative of the New Topographics movement has been a coach and mentor to Parker. Whereas, Baltz is deceased, Parker is capturing energy from the art form that was created before he was born. Parker, examines Baltz strategies, and then expands on contemporary land issues, industrial/storage parks with repetitive grids, abandoned gravel pits, snow piles and frozen parking lots. He uses the light from the night billboard and reduces it to land art, as it might be a temporary Smithson Spiral Jetty. 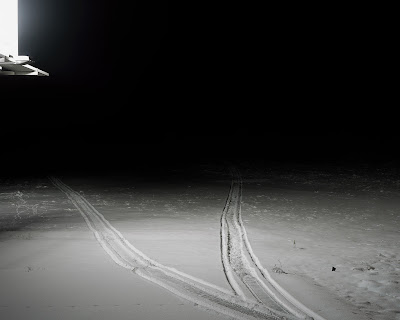 Parker’s photo series document the contemporary industrial landscape, reducing each photo to its minimalistic hypnotic form. He deploys everyday scenes that appear outside our comfort zone, implementing photography techniques that disturb our visual senses. It is this skill, knowledge of photography and passion that makes him a modern landscape prophet.


Mr. Parker's complete photo essay can be found at: https://www.ryanparker.info/

Popular posts from this blog

October 05, 2017
Marcella Anderson and/or Marcy Anderson (1946 - 2015) was better known as "MARCEL", a popular serigraph/silkscreen artist, at the Torpedo Factory Art Center in historic Old Town Alexandria, VA. She maintained a gallery and work space at the Torpedo Factory from 1976 to 2015. At the top of the stairs on the 3rd floor was this large light filled studio with a charming blonde woman surrounded by her silkscreens. In the early 80s, her work consisted mostly of water reptiles, fish, birds and environmental scenes. She kept with nature themes during most of her time at the studio. Her obituary stated: "Marcel was known for her bold, yet sensitive, use of color and design. Her images in all media reflected her love of nature. Her glowing color, both intense and delicate, was achieved through the use of transparent layers of color." Marcel was born and raised in Seattle, Washington and studied at the Cornish School of Allied Arts. Before arriving in the DC area, she had
6 comments
Read more

July 10, 2020
This article is dedicated to my Japanese (nihongo) Sensei, Atsuko Kuwana, who helped me learn to speak Japanese. Collectors come in all varieties, some plan their collections, others start by chance.  I saw my first kokeshi（こけし） wooden doll in 2005 while participating in a grassroutes exchange program between the U.S. and Japan.  I was staying with a family near Nagoya and the couple’s young daughter had one.  Years later when I was named a Mike Mansfield Fellow from the U.S. government to the Japanese government, and was living in Japan, I would see them frequently at flea markets and souvenir shops next to the natural hot spring resorts in the area known as Tohoku.  Before leaving for Japan, I studied all things Japanese at the George Shultz Foreign Service Institute (FSI), including a professor that covered domestic and family life and some short statements on kokeshi.  After arriving in Japan, the National Personnel Authority ( jinjiin ) was responsible for my continued studies, b
Post a Comment
Read more

February 05, 2019
Thorpe, a totally modern artist, used London and the bucolic country side as his muse.  Clearly the London cityscape was his inspiration.  He painted all the city sights:  St. Paul's Cathedral, the Parliament, the Palace of Westminster, the Beefeaters at the Palace, the Victorian Memorial, Big Ben, the Monument and of course Trafalgar Square.  These London landmarks are painted with affirming gestures in moody blues and graphic grays.  His palette knife application technique, along with his brush work was applied in a quick layer over the oil underpainting.  There is an appearance of buildup-so caked on, that the results look molten.  This methodology created textured impressions right on the canvas.  He combined architectural details with spontaneous happenings.    His color palette frequently includes red double-decker buses, Beefeater guards or flags that add balance to his moody paintings.  In " St. Paul's Cathedral " below, Thorpe presents a rainy evening with
Post a Comment
Read more